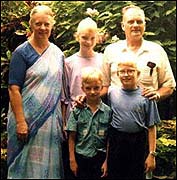 The death of Dr. Graham Staines, 58, director of the Leprosy Mission in Baripada, Orissa, India, and translator of the New Testament into the Ho tribe language, brought about profound effects in India. Staines had spent 35 years of his life to help the poor and illiterate in India.

Staines, a native of Australia, was attending the 14th annual jungle Bible camp in the village of Monoharpur. Just after midnight, January 23, 1999, Staines was sleeping in his jeep with his two sons, Phillip, 10, and Timothy, 6. The windows were broken out of the jeep, gasoline was poured on and ignited, and the jeep was enveloped in flames. The charred bodies were found embracing each other. A few days later, Graham's wife, Gladys, 49, offered a clear and public statement forgiving the killers. Graham is also survived by his thirteen-year-old daughter Esther.

As a result, Indian voters, revolted by this extremism, are considering throwing out the prime minister placed in power by the radical Hindutva forces, seeking to purify India of non-Hindu religions, and replacing him with the wife of former prime minister Rajiv Gandhi, Sonia Gandhi, an Italian Catholic.

In addition, Graham Staines, a humble man, and his wife Gladys, have been exalted in India as examples of true Christian spirituality.

United Christian Forum for Human Rights (UCFHR) has documented more than 120 attacks against Christian individuals, churches, and schools by Hindu fundamentalists in the past year — half of them in the western state of Gujarat

"The Murders of a Father and His Two Sons," Banner of Truth, London. Eulogy to Graham Staines from a friend who knew him.

Christopher Kremmer, "Missionary shot first, says suspect," The Age (Victoria, Australia), March 1, 1999. Suspect claims that Staines shot first, and was shot before being burned. But there are no reports of Staines having a weapon.

Graeme Cole, "Missionary leaves a living Testament to a life of service and mission," Bible Society in Australia, February 8, 1999.

"Who Needs Political Enemies," MyIndia.com, February 4, 1999. Discusses the political ramifications in India of the killing.

Michael Fischer, "The Fiery Rise of Hindu Fundamentalism," Christianity Today, March 1, 1999. Quotes from Gladys Staines and background on the situation.