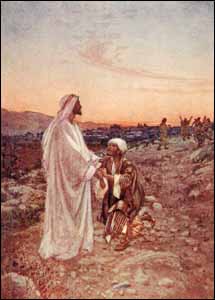 Ten men silhouetted along the low ridge called to the leader of a small band below: "Jesus, Master, have mercy on us."

One of the ten was Bartholomew. He glanced up. We're lepers, he thought. Ragged, pitiable, incurable lepers. Why would he care about us?

From the time their skin disease was diagnosed, lepers were cut off from society, forced to live on their own in caves or huts away from towns. A fortunate few had relatives who would leave food for them, but many had no one. They weren't allowed close enough to beg for a living. Ragged, thin, rejected. Lepers. Even the word spoke an icy finality. These ten stayed together for protection, pooling their meager resources.

"Have mercy on us!" Bart's friends shouted again.

As Bart looked, Jesus was turning their way. He cupped his hands now so his voice would carry better, and called across the low valley which lay between the road and the ridge where the lepers stood. His voice rang out sharp and compelling in the stillness of the morning.

"Go! Show yourselves to the priests!"

The lepers looked at each other. You only went to the priests if your leprosy was gone. Only the priests could issue a clean bill of health so you could return to your family.

As they held up their decaying limbs, they were asking, "Why go unless we're healed?" They looked over to Jesus again, but he had turned away, conversing with Peter and John. So the lepers began their trek towards the town of priests; it was something.

Then Bart heard a shout, a cry of exaltation, a loud eerie call that filled the valley and bounced off the hills: "I'm healed! I'm whole. My leprosy is gone! It's gone!" Bart look at his own diseased body, too, and realized that the leprosy had left him too. His fingers were whole. He reached up to touch his nose. It, too, was smooth and whole. Other lepers began exclaiming also. "I'm healed! I'm healed!"

Bart looked back at Jesus and his band just in time catch a smile flirting at the corners of Jesus' mouth. The healing hadn't occurred as the lepers stood looking and wondering. It had taken place as they had begun to obey Jesus' words. "As they went" they were healed.

Suddenly Bart broke from the circle of rejoicing ex-lepers. He bounded over the little creek and raced towards Jesus' band, rags fluttering behind him. He sped toward Jesus and then landed on his knees before the Master in a cloud of fine dust.

He spoke just a phrase -- "Thank you, Master" -- in his broken accent of Samaria. Then he just knelt there sobbing.

Jesus spoke now, not really to Bart, but beyond him somehow, as if to the whole world. "Were not all ten cleansed? Where are the other nine? Was no one found to return and give praise to God except this foreigner?"

Bart's mind spun. He thought of the countless times God had answered his prayers before his leprosy, provided for his family, given him work, healed his sickly daughter. How often had he really said "Thanks"? So often he had taken these blessings for granted, rejoicing in his good fortune, but never racing  to the Giver with a word of heartfelt thanks on his lips.

As the Bart knelt, Jesus' hand instinctively rested on his head, blessing, and at the same time stroking and smoothing the tangles left from years of sojourn. Jesus wept as he caressed the man's head, tears making rivulets down his cheeks into his beard.

Bart looked up. The rest of the leper band was now heading off towards the priests' village. They had received physical healing, indeed, but at Jesus' feet, Bart had received a healing of his whole person. As Jesus helped him up, he said, "Rise and go. Your faith has made you whole."

Bart embraced Jesus. Then they stood there for a moment looking at one another -- smile meeting smile. The gift of healing had sent him the message of God's love, but thanks had brought him home.

This is a fictional retelling of the story found in Luke 17:11-17.
Bkmrk