The Amazing Story
an Easter Meditation 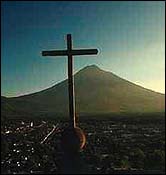 Our regular waitress at a Tuesday morning Bible study breakfast is a professional clown on the side. "I'm getting ready for Easter," she said. Yes, she had a bunny suit and bunny ears for various parties where she would be asked to clown. And candy Easter eggs. Lots of Easter eggs.

If you ask children what Easter is about, they'd probably say something about the Easter bunny. It's a pervasive story. Not very persuasive or compelling, but cute and seemingly harmless enough.

But the story of the Easter bunny tends to displace a much more compelling Story. A true Story. An Amazing Story that I'd like to tell you right now in a few words.

The Amazing Story concerns a man, a carpenter who lived 2,000 years ago in an obscure Roman province in a town called Nazareth. At age 30, the Man hung up his leather carpenter's apron and began to speak publically up and down the countryside.

Religious leaders were ambivalent at best. Most felt deeply threatened, because this ex-carpenter taught in huge outdoor meetings with compelling authority -- and he healed people. Not just colds and fevers, but crippled limbs and blind eyes. On two occasions, he even brought people back from the dead.

The religious leaders saw their orderly world spinning out of their control. And so they determined to eliminate the Man. They infiltrated his inner circle so they could grab him away from public view. And once in custody, they engineered a trial behind closed doors, and then put huge political pressure on the Roman governor to execute him immediately. Within 12 hours of his arrest, the Man hung on a cross. Six hours later he was dead -- seemingly a martyr to a glorious but hopeless cause.

But there's more. The Man did not resist his arrest and crucifixion -- in fact, he had predicted it to his followers again and again. And he taught that his death would have incredible meaning -- that he would give his life as a ransom for many. That is, his death would pay the ransom price for a multitude of people who were enslaved by their own sins -- and set them free. That's what he said. And on that cross he prayed for his crucifiers -- certainly enslaved in their sins -- "Father, forgive them, for they don't know what they're doing." And he died. A Roman centurion who saw him die said, "Surely, this man was the Son of God."

He died on a Friday at just about three in the afternoon. By dusk he had been buried by a rich follower in a tomb hollowed out of solid rock, a tomb protected by a huge stone that rolled into place along a channel in the rock, then clunk! The tomb was secure. Friday night and all day Saturday his cold body lay there.

But Sunday morning, the Sunday we call Easter, some women had come to complete the hasty burial and they found the stone rolled back and the tomb empty. An angel appeared to them saying, "He is not here, he has risen." This, too, the Man, Jesus, had foretold to his followers.

Over the next 40 days, he appeared to his disciples and others, to even 500 at one time. And then he left planet earth promising to return. His Spirit was poured out on his followers a few days later. Within a single generation his followers travelled with the Amazing Story to all of the known world. Our world has never been the same. Because where people believe the Story, they find forgiveness and freedom and meaning. They receive the Spirit of God themselves and they began to love.

The Story we tell is a life-transforming Story. If we would tell it to our children and grandchildren, they would find that it is much more compelling than any Easter bunny tale. The only appeal it lacks to your children -- and to our desperately needy world -- is a few pastel candy Easter eggs. Tell the Amazing Story. It changes lives.

Copyright © 2013, Ralph F. Wilson. All rights reserved. If you reprint this online you MUST contain a live hyperlink to this page:
https://www.joyfulheart.com/easter/the-amazing-story-of-easter.htm